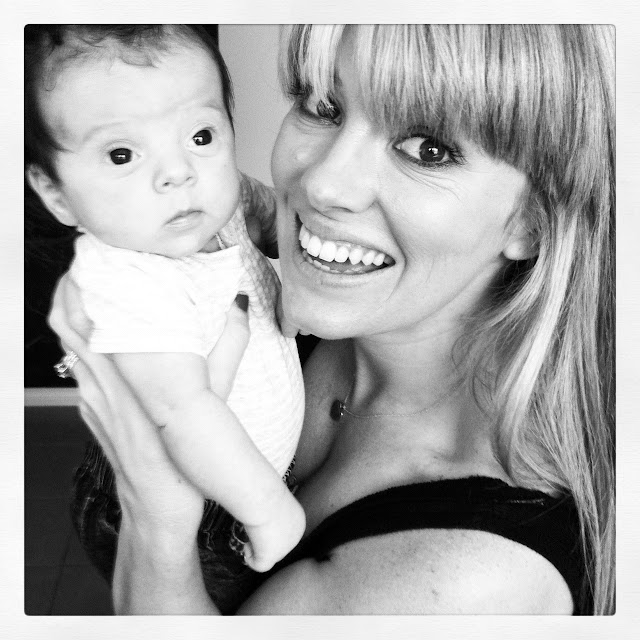 
Nat is currently finishing work on her upcoming e-book on priming your body for fertility, with tips and tricks for a wellness overhaul, including over 25 recipes for building a fertile body. I'll keep you posted when it comes out.

image: the beautiful image of Nat with baby Geordie is courtesy of Nat
Posted by Lexi:: PottyMouthMama at 6:58 am

Thank you Lexi and Nat.A perfect match I think for Geordie and his family.
xx

Oh Nat. I am sorry and I know you do not need to hear that but I had tears in my eyes. I have been in love with your little Geordie from the first day you posted pics on facebook. He is in the best hands with you as a mother. I wish all your family the very best and a long healthy time with your boy.

Thank you for sharing.

Nat I hope Georgie continues to put on weight and stay as healthy as possible during the future and that research continues to help learn how we can beat this. In all of my life I've never known a family with CF until a few years ago, now I know at least 4 families with children with CF. one friend in particular is very active in informing those around her with just exactly what cf is. Her and her army of friends and family also fundraise every year too. I think it's always inspiring watching her do her thing and I feel like I understand a little more now because of her. She has a couple of blogs and a fb page, if you want to check them out send me a message on fb and I'll send them via inbox. Fiona Dixon xx

My two little children are Autistic and would you believe my best girlfriend (of over 35 years!) also has a son with Autism. MC and I put it down to eating too many lolly bananas - our lolly of choice back in the day.
The thing I have learnt is that you must keep your sense of humour and if you have a bad day, start again tomorrow.
I wouldn't trade my two precious children for anything in the world. They have taught me to be a better person.
Thank you for your beautiful story.
xx

THANK YOU SO MUCH FOR SHARING YOUR BEAUTIFUL STORY NAT!
We too got the call that our new baby had a 1 in 5 chance of having CF after the new born screening test. My husband had already packed our bags and planned our new life and began to move us out to the bush... P ended up just being a carrier of the disease but the days of not knowing were the scariest of our lives, the fear of the unknown and the challenges her life could hold. I love how your positivity radiates and it has touched me greatly. Geordie is truly blessed to be born into such an amazing family and a "stop at nothing" mumma! Keep on keeping on! You are a champion! xo